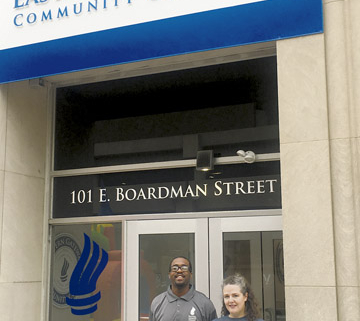 YOUNGSTOWN — For several years, Jonathan Thomas has worked in the retail industry, but thanks to a decision to further his education, his career path forward has been brought into sharper focus.

“Once I graduate, I hope to find a job in the paralegal field, then get a bachelor’s degree and go to law school,” Thomas explained.

Those goals seem much more tenable for the 2011 Chaney High School graduate, thanks largely to his decision two years ago to enroll at Eastern Gateway Community College, he said.

Thomas also was among the students, faculty and staff who took part in “Celebrate Students Day,” a four-hour gathering Thursday on and outside of EGCC’s campus to celebrate the two-year college’s 10-year anniversary in downtown Youngstown.

The event was one of several celebrations that began Monday to mark the occasion.

Thomas, a nontraditional student who plans to graduate next May and likely pursue a bachelor’s degree from Youngstown State University, said EGCC has provided him with greater clarity and a roadmap for his career.

“(EGCC) gave me the opportunity to see that it’s possible,” said Thomas, who also has a job in the college’s maintenance department and is taking a class in criminal law. “It gives me a skill set now.”

This week’s events for the occasion also reflect on and celebrate EGCC’s achievements during the past decade. In addition, a 10-year banquet is planned for next spring, with the primary goal of unveiling a strategic initiative for the next 10 years, President Jimmie Bruce noted.

“It’s designed to be a fun day to recognize the fact that we’ve been here 10 years,” he said about Thursday’s celebration.

Another overall goal is to look at new programming and initiatives to expand local enrollment.

Among the offerings regarding the partnerships is a work-advance program in which students who are unemployed or underemployed can get paid while being trained for a career.

“We know this area is underserved. This gets them back in the workforce,” said Daly, who added EGCC also has partnered with Angels for Animals Inc..

In addition, EGCC has formed a relationship with Buster’s Brigade, a new nonprofit organization that helps mainly homeless dogs and cats, noted Abbie Twyford-Wilson, the college’s director of student activities.

The effort is largely to assist students with low income with buying pet food as well as paying for spaying-and-neutering services, she said.

Twyford-Wilson added that she hopes EGCC students also will enjoy a greater connectivity to downtown Youngstown, and that gaining a quality education will be easier for them.

EGCC Gets $836K Grant for Training Center
Scroll to top