YOUNGSTOWN, Ohio – A local delegation is planning a visit to an automotive training center in Chattanooga, Tenn., as part of efforts to encourage energy-related economic development in the Mahoning Valley.

Expected to take place later this month or in early April, the trip to the Volkswagen Training Center is being planned to learn what kinds of training will be needed to support Lordstown Motors Corp., which plans to begin production of its Endurance electric-driven pickup truck later this year. 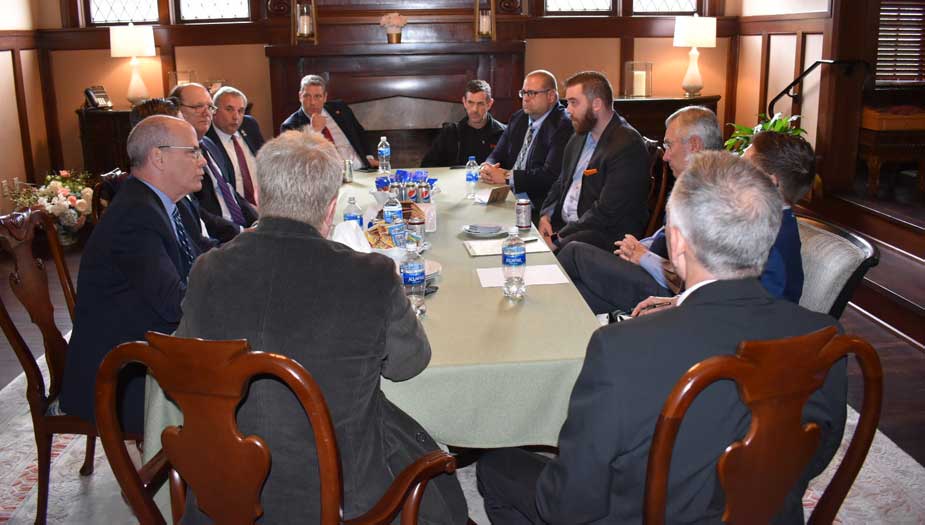 Officials are exploring ways to boost not only the Lordstown Motors plant but the $2.3 billion electric vehicle battery plant that General Motors and LG Chem plan to jointly develop in Lordstown.

“What we’re just seeing is great bipartisan support for Lordstown Motors here in the community,” said Chris Kerzich, director of government relations and corporate affairs for Lordstown Motors. “One of the key things that was discussed was how does this region brand itself to be this hub, this epicenter, this Voltage Valley.”

Added Tressel during a press briefing following the meeting, “What all of us are trying to do is see what we can to do help Lordstown Motors be successful and also create that whole excitement about Voltage Valley and the future. Finding out what role we can play is most important from an educational standpoint and from a research standpoint.”

Who specifically will go on the Chattanooga trip is begin determined, but YSU, Eastern Gateway Community College and local career and technical centers will be represented, Tressel said. Objectives will be to determine what training is required and what career pathways can be developed for workers at the plants.

The career pathways could include degrees or certificates from YSU or Eastern Gateway, or training at the Mahoning Valley Innovation and Commercialization Center for which construction is expected to begin this year.

YSU “won’t be the trainer for all jobs but we’ll have our part of the career pathway,” Tressel said.

Eastern Gateway’s role is getting plant workers the training, skills, certificates and stackable credentials that will apply to the new industries coming to the Mahoning Valley, said Art Daly, vice president at Eastern Gateway’s Youngstown Campus.

“It’s the whole thing of how do we get the region to work together to create this epicenter for electric vehicles, this Voltage Valley,” said U.S. Rep. Tim Ryan, D-13 Ohio. “There are obviously a lot of different parts to that so we’re working with all the different constituent parties to make sure that that happens.”

Lordstown Motors is considering an application for a loan from the U.S. Department of Energy’s Advanced Technology Vehicles Manufacturing Loan Program. Another potential federal piece is the $7,500 tax credit for individuals who purchase an electric vehicle.

“That’s what you do to incentivize a new market,” Ryan said. “The president zeroed [the Advanced Technology Vehicles Manufacturing Loan Program] out in his budget and we’re going to work really hard to put it back in so that consumers can be able to access those trucks.”

In addition to that effort, JobsOhio has “taken the lead” on exploring ways to help Lordstown Motors, including additional financing, according to Rulli.

“There’s so many different aspects of Lordstown Motors that could be addressed,” he said. “Initial financing is pretty strong as far as retooling and getting them up and running, but there’s so many other different programs that they could address if they had the proper funding.”
Representatives of JobsOhio are regularly reaching out to Lordstown Motors, Rulli added.
“We think when you have a company that could be cutting edge like this –and who knows what the future is going to look like – that it can be an attractor for the whole region,” Tressel remarked.

“We want to push this as hard as w can,” Ryan said. “It’s probably the greatest opportunity we’ve had in this community in 50 years.”

EGCC to ‘Recharge’ the East Side of Federal Street